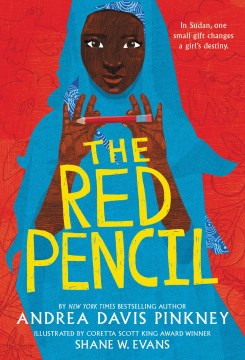 *Starred Review* As Amira's twelfth birthday approaches, she finds herself distracted from her daily responsibilities on the family farm: doing chores; looking after her little sister, Leila, who was born with special needs; and caring for her little lamb, Nali. She dreams of school, but that is not the traditional way for girls in Sudan. Life is hard, with scarce food, distant water, and the looming obligation of marriage and motherhood. Still, she scratches out her thoughts and dreams in the dirt with a precious twig, wishing. Then the Janjaweed arrive and decimate the village in an attack that kills her father and Nali. After the remaining family members and their friend Old Anwar relocate to a refugee camp, Amira's spirit is sorely tested, but the gift of a pad and a red pencil restores her sense of agency and offers the promise of learning. Pinkney's short, clipped verse expresses the harsh difficulties and intimate beauties of daily life—dust storms, orange soda, family devotion—in broken lines that capture Amira's breathless anxiety and hope. And if the evocative poetry is the novel's beating heart, Evans' spare, open, graceful line drawings are its breath, recalling Amira's own linear musings, drawn on the ground or in her own tablet. Ultimately, this is an inspirational story of the harrowing adversity countless children face, the resilience with which they meet it, and the inestimable power of imagination and learning to carry them through. Copyright 2014 Booklist Reviews.

The first part of this vivid verse novel, set from September 2003 to March 2004, celebrates twelve-year-old Amira's life on her family farm in Darfur, Sudan. After a violent attack by the Sudanese militia, Amira and her family become refugees. Pinkney uses onomatopoeia, rhythm, and prismatic imagery to describe Amira's feelings. Evans's spare illustrations provide valuable visual context and a much-needed sense of buoyancy. Glos.

The first part of this vivid novel, set from September 2003 to March 2004, celebrates twelve-year-old Amira's life on her family farm in Darfur, Sudan. Her first-person prose poems and lively childlike sketches focus on her Muma and Dando and little sister Leila; her friend Halima who leaves the village to attend school; her favorite sheep Nali; and the other elements that make up her world: wheat and tomatoes, sparrows and the wind storm called the haboob. But whispers of the Janjaweed (Sudanese militia) infect even this happy childhood, and in a violent attack, everything changes. Dando is dead, Nali is dead, and Amira and her family become refugees, traveling by night to a displaced persons camp. Life there is marked by deprivation, and Amira's voice becomes choked off by the violence she witnessed. But when an aid worker gives Amira a red pencil and a tablet of paper, Amira's drawings find a way to lead her out of sorrow and back to life. Pinkney's verse uses onomatopoeia, rhythm, and prismatic imagery to describe Amira's feelings. Evans's illustrations keep on the spare side but provide valuable visual context and a much-needed sense of buoyancy. Throughout, text and drawings make Amira's experiences seem real to young readers without overwhelming them, allowing them to share in her hardship and eventual renewal. Back matter includes an author's note, glossary, and pronunciation guide. anita l. burka Copyright 2014 Horn Book Magazine.

Told in free verse and set in the South Darfur region of Sudan in 2003 and 2004, this potent novel from Pinkney (Hand in Hand: Ten Black Men Who Changed America) is built around the distinctive voice and drawings of 12-year-old narrator Amira. The first half of the novel examines Amira's life in her rural village, where she helps out with farm chores, wishes she could attend school, and has a close relationship with her father, Dando, who "sees what is possible in me." After Janjaweed militants invade, inflicting great loss, Amira flees to a refugee camp, where she expresses her creativity through art, after a teacher gives her the pencil of the title. Evans's (We March) loosely drawn and deeply affecting line illustrations heighten Amira's emotional reality; in one image, accompanying the poem "Shock," a simple figure surrounded by a violently scribbled border demonstrates Amira's despair: "My whole heart./ A sudden break./ My Bright,/ turned black." Pinkney faces war's horrors head on, yet also conveys a sense of hope and promise. Ages 9–up. Agent: Rebecca Sherman, Writers House. (Sept.)

A long walk to water: based on a true storyPark, Linda Sue

Brothers in hope: the story of the Lost Boys of SudanWilliams, Mary, 1967-

Home of the braveApplegate, Katherine

The boy at the back of the classRauf, Onjali Q.